IT’S NOT OFTEN you hear a story about the police compensating a shooter for a mistake they made.

In fact, we’re struggling to recall any instance where this has happened… but now it has, after our intervention.

EARLIER THIS YEAR, we told you the story of how the Queensland Police Service (QPS) sold a gun that didn’t belong to them.

The gun, a Mark 4 Series 70 Gold Cup International Colt 45, was stolen from Peter in 1986 before being recovered by police in 1991 when they arrested a criminal.

The QPS told Peter they had his gun, but needed to keep it for evidence for the time being.

However, they later ‘lost’ the gun, which resulted in Peter being left empty handed.  He even met with previous Chief Commissioner, Jim O’Sullivan, who was apologetic for what happened, but the whereabouts of the gun were unknown.

The problem was that the Central Exhibits Facility, simply failed to keep it’s paperwork straight. We think it’s as simple as failing to record the gun’s serial number correctly. 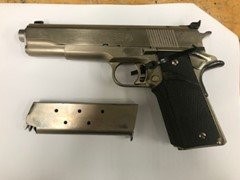 Peter’s gun, photographed by QPS before they lost it.

Last year, Peter found the original box and receipt which prompted him to follow the matter up with QPS.

QPS admitted that they found the gun but had since sold it to another person and they registered it in their name.

They said the reason this happened was because Peter failed to update his contact details – but documents prove that not to be the case.

The matter went to the Magistrate’s Court which strangely found that Peter had no right to the gun.  That left Peter with no gun and no right to redress – which is when he came to us.

In November 2020, we wrote to the Queensland Police Minister, Mark Ryan on Peter’s behalf.

We asked the Minister to agree to a meeting with both Peter and the current Police Commissioner so that the conversation could continue so that compensation could be provided to Peter.

Over the months that followed, Peter had discussions with three Acting Inspectors to resolve the matter.

The sticking point that prevented settlement was about the level of compensation that should be paid.

Peter’s gun was a 1911 Colt 45.    As A/g Inspector Mark Muller has pointed out, these are available on the Australian Market for under $2k. He spoke with Colt in the US and NIOA who is the local distributor, and a local Queensland gun dealer who stated:

Another of A/g Inspector Muller’s enquiries found a similar gun – with polishing and nickel plating added – to be $2,274.

However, Peter’s position is that this is not the same gun. His gun was an original issue from the early 1980s.

As he said, there is a difference a 40 year old Ford in great condition, and one that is much newer.  The problem is that the same gun, the same age and in the same condition as Peter’s, is not on sale in Australia – which reflects the rarity and therefore value of the gun.

Peter managed to find one with a serial number close to the one he had that was available for sale in the US for around $8,000 Australian.  However, the police believed their comparison was more accurate – at $3,529.

This discussion went back and forth for several weeks.

Sticking to the valuation

To his credit, Peter didn’t relent.  He stuck to the argument that the older gun was worth considerably more and rejected the offer.

QPS let the offer lapse at the start of November (2021), which meant the only remaining course of action available to Peter was to take the matter to a higher court.  This is an option that would have cost him more than the $4,500 difference that was being pursued.

Unhappy, we wrote to the Police Commissioner and Police Minister advising them of our disappointment that the QPS would not give proper recognition to the value of the gun that it lost and that it ended up selling.

A/g Inspector Muller then called us.

One final go at settlement

After some further discussions, Peter agreed to accept the offer, as it was clear that neither the Chief Commssioner nor Police Minister were doing to do anything, and QPS was not going to budge.  The only remaining course of action would have been to fight the matter through the courts with no guarantees.

As a result, Peter will now get his compensation.

While the level of compensation remains inadequate, the fact that something has been paid is, we believe, welcome news.

Silence from the top

We’re obviously critical of the QPS in their handling of this from the start.  However in amongst that were good people who were trying to ‘right a wrong’. We’re grateful to A/g Inspector Muller for his efforts to keep the conversation going and the offer on the table.

He is an IPSC shooter himself, but obviously has a job to do and was working to his superior’s instructions.  We have no issue which what he did. 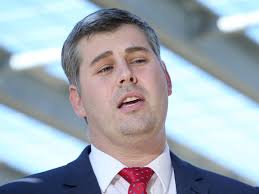 However we can’t say the same for QPS Chief Commissioner, Katarina Carroll, or Police Minister, Mark Ryan.  Both washed their hands of this matter and refused to meet with Peter.

Their lack of lack of interest in the matter – given this was a QPS stuff-up – was discourteous, to say the least.

It would have helped if they showed at least some respect for Peter, but they did not. 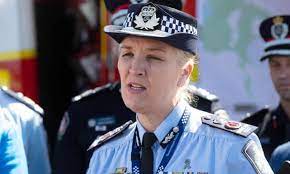 Queensland Police Commissioner, Katarina Carroll, who failed to come up to the standard set by her predecessor, Jim O’Sullivan.

The paying of compo to a shooter by police is a first. It’s a good news story, which is why more and more shooters are supporting what we do.

We know things have been quiet of late, but the NSC has not been sitting idly by.

We’ve been working on other stories including a number of legal actions – which you will be hearing about over the next several weeks. It’s worth the wait.

17 thoughts on “COPS PAY COMPO: Queensland Police to cough up for lost gun”