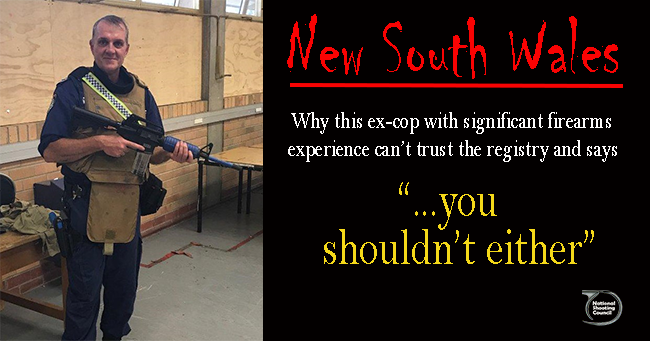 In this article we tell you how we helped a former NSW Police Officer get his firearms licence.

We’ll also tell you about why NSW Police believe it would be ‘prejudicial’ to reveal how they make decisions relating to firearm related applications: something that we believe should be transparent.

MIKE BALDOCK was a collector/amateur gunsmith and restorer with a large number of firearms.

He also served for 25 years with the NSW police.

In 2017, Mick attended a job where a female died in terrible circumstances that affected him to the extent he was diagnosed with anxiety (later PTSD).

Later that year, he attended another tragic death of a teenager.  After being treated for that matter, he worked until March 2018 when he could no longer work.

Nine months later, his command approached him with the intention of seizing his firearms.

Mick argued his case, after having had possession of his firearms at home for a lengthy period with no issues.

To their credit, they agreed he could keep his firearms provided he obtain a document from his psychologist that he was not a threat to himself or others. This was provided: It said:

“I have no concerns in regards to Mr Baldock’s ability to exercise continuous and responsible control over firearms.” 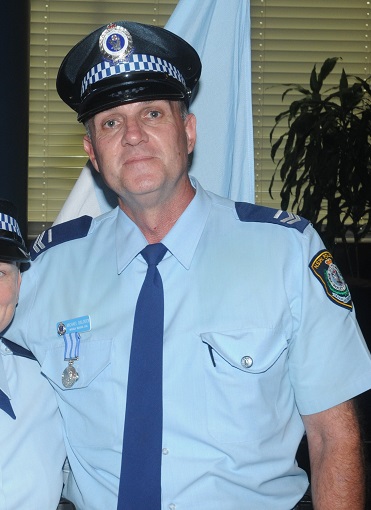 In February 2019, Mick returned to work in a limited capacity. After six months, Mick left his work place and colleagues of 20 years.

In March 2020, the NSW firearms registry decided to seize Mick’s firearms and suspend his licence.   This is despite his none of his former colleagues expressing any concern, or there being any indication from medical practitioners.

In November 2020 the registry sent Mick a health questionnaire that was completed by his psychologist who held no fears about him, in similar terms to the earlier assessment.

However, Mick soon received a Revocation Notice, stating the report had been deemed unfavourable.

Police fail to state their case

Mick has been a lawful firearms enthusiast since a young age, using both rifles and handguns.   He enjoys refurbishing vintage sporting rifles. 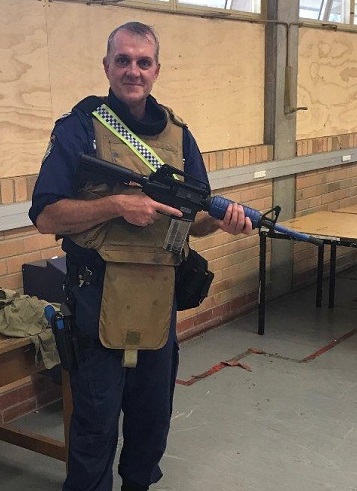 Mike, as a former weapons trainer

Mick served as a NSWPol weapons trainer, being a qualified instructor on Glock handguns and Taser Electronic Control Devices and an accredited Active Armed Offender instructor.

He was awarded the Juan Carlos Hernandez Memorial Shield at the NSW Police Academy for pistol shooting.

He was also a custody manager, and managed risk assessments for 25 years.

There was never any prospect of harming himself, let alone others.

In October 2020, Mike applied for a freedom of information request (in NSW called Government Information (Public Access) – GIPA) relating to the suspension of his licence.

Specifically, he sought documents relating to the NSW Police’s decision-making checklist and other documents but did not receive what he was after.

They refused the supply this, stating:

“the Firearms Registry have forwarded to me the documents pertaining to your matter and the information you have requested in relation to the “decision making” falls under the deliberative process in the GIPA Act and cannot be released to the public, specifically.”

Under the GIPA Act, the exemption that relates to ‘deliberate processes’ must prejudice how the agency functions.

In other words, NSW Police are arguing that it would be prejudicial to reveal how they make decisions relating to firearm licences.

The appeal - and simple one word answers...

Mick contacted the NSC which funded an appeal to NCAT.  Mick retained his own solicitor, but we also put him in touch with our barrister so the two lawyers could work together on the appeal.

NCAT ordered the decision to go back to NSWPol for an internal review. Yet the registry said the assessment was ‘unfavourable’ and decided it was “not in the public interest” for Mick to have firearms despite the clear evidence from practicing professionals to the contrary.

In fact the evidence was more than clear.  The image to the right shows you some of the evidence produced by Michael that provides nice, simple one-word answers.

The report concluded by saying there is no concern about his abilty to “exercise continuous and responsible control over firearms” – as he had done while in NSW Police.

Yet the police managed to read this differently. 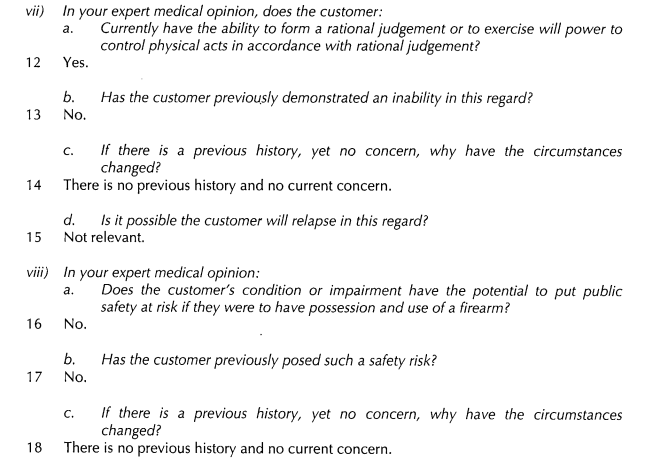 Extract from assessment: this is what nice clear answers look like…

The matter went back to NCAT, with the hearing held on 16 November.   The brief of evidence submitted by NSW Police provided no evidence to contradict the evidence put to them.

A month before the hearing, NSW Police’s legal counsel argued they could not reinstate a licence because it had since expired but importantly suggested Mick re-apply for his licence.

It was evidence that the NSW Police’s own legal team was not prepared to follow the same line taken by the registry.

Mick applied for his licence, which was approved on 6 December.

Mick says this matter leaves a sour taste in his mouth.  He still has the utmost respect for those in his former workplace and “would go back tomorrow” if he could.  He had no problem with any reasonable information requests, but has no faith in the registry.

In fact his advice to everyone else is:

“and you shouldn’t either.”

This game playing has cost Mick a considerable amount of money and stress. It resulted in the seizure of $20,000 of his property and denied him his favourite pastime for 20 months.

All because he did his job.  We can’t make up for his lost time, but with the new year here, our message is

… but we’re not done yet.  We’ve got at least two more stories on the NSW registry on their way.

We’d also like to thank Mike for being willing to share his story publicly.  Hopefully exposing what happened to him will help stop the same happening to others.