THE NSW POLICE FIREARMS REGISTRY continues as Australia’s worst registry, after telling a licence applicant to wait ‘several months’ for an internal review process that should take only three weeks.

The registry’s ranking comes after it:

The NSC already has legal actions in NCAT on the first two matters, and has now helped a shooter who was denied a fair internal review, a third one.

NSW Police must provide a right of internal review for people who might be adversely affected by a decision of the registry.

It’s called ‘fair process’ and there is an expectation within our legal system that they will apply this properly.

Normally the registry will take at least 28 days to finish an internal review, although they are required to finish it within 21 days.

If they fail to provide an internal review within 21 days then the applicant has the right to appeal the matter to the NSW Civil and Administrative Tribunal (NCAT).

On 27 August, the NSC helped  “ J “ lodge a request for an internal review of a decision to deny him a firearms licence for old and incorrectly reported reasons we felt were worth objecting to.

40 days later, we followed this up with an email enquiry.

That’s when we got this extraordinary reply which said nothing had been done – several footy grand finals and a new NSW Premier later. 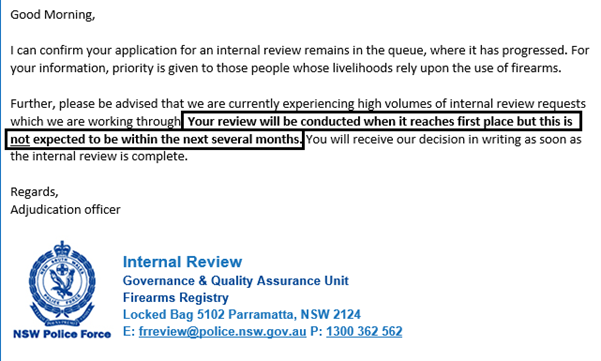 J would have been able to wait a bit longer if the NCAT need a bit more time.  However, being told to stay in the queue for several months before the registry will even begin to look at this is far from good enough.

It’s far from fair.  This response puts anyone seeking a licence or some other outcome who can seek an internal review, in limbo until well into next year.

It leaves people like J with no real option other than to launch a new action with NCAT, which will most likely deal with the matter a lot sooner.

We feel for shooters in NSW – it looks like your registry is struggling to do its job.

For the NSC, it means filing another action in NSW, which we’ve done.

In fact, we’re hoping that NCAT will have something to say about this atrocious way of managing internal reviews processes and force some kind of re-think about how NSW Police priorities its responsibilities under the NSW Firearms Act.

This is another example of why being an NSC member is a must. The NSC supports its members and our sport all day, every day, day in day out.

For our registries to improve. Join the NSC.