GREAT NEWS: Shooting is back in the Commonwealth Games – but look who’s claiming the credit 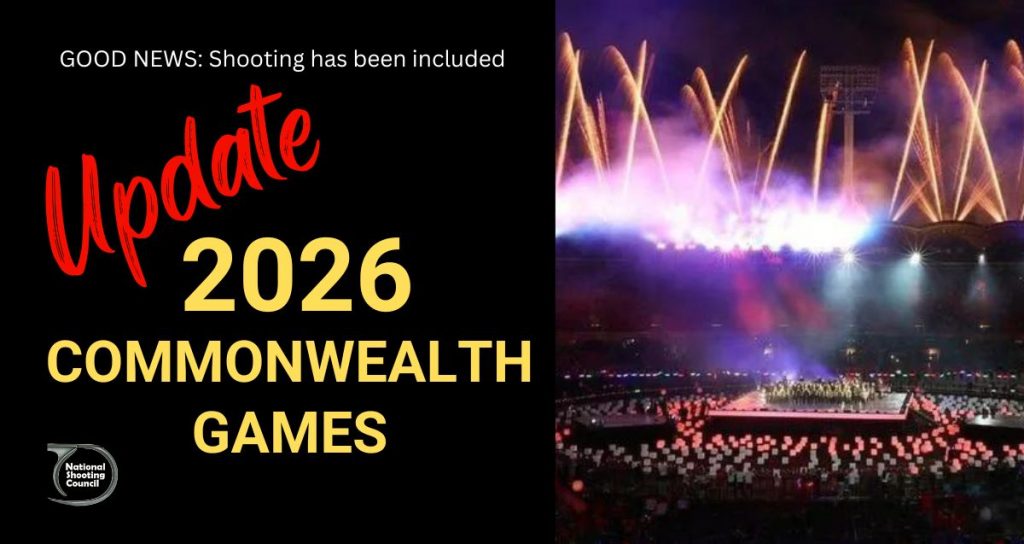 IN THIS ARTICLE, we tell you:

THE GREAT NEWS is that some shooting events will now be included in the 2026 Commonwealth Games to be held in Victoria.

This follows the decision to leave shooting out of this year’s Commonwealth Games in Birmingham, in a move that stood the risk of shooting never finding its way back into the fold.  Click here to see our previous story.

The exclusion of shooting also risked spreading to the Olympics. That’s why we believe this is an vitally important decision.  Not only for the next Commonwealth Games but for the future of the sport more generally.

However, there is only one shooting organisation that is truly at centre stage. That is Shooting Australia (SA). They are the national body that has responsibility for organising shooting at the Commonwealth Games, in conjuction with the International Shooting Sports Federation (ISSF) and Commonwealth Games Federation).

SA was very proactive in what it did and deserve full credit for what they did.  Unfortunately, the Victorian arm of the SSAA is also claiming credit for the outcome, even though they have nothing to do with the Commonwealth Games.  It’s contribution to the lobbying appears to be nothing more than a couple of Facebook posts.

Click here to see what SA said in their recent announcement

Click here to check out this statement from British Shooting.

The other thing you will see from the information below is that the SSAA does not appear to understand or respect the international framework governing shooting at major ISSF events – such as the Commonwealth Games, Olympics and World Cups.

Shooting is incredibly diverse and complex.  To be fair, the SSAA Vic caters for a large and wide variety of shooting needs. They do a lot of good things – and good on them for that.

However, they have no connection with the Commonwealth Games.  Shooting for the Games (and Olympics) is organised internationally through the International Shooting Sports Federation (ISSF) which liaises through federations in each country. In our case, that is SA

SA is in turn made up of some of the other names that will be familiar to you.  These include Pistol Australia, Australian Clay Target Association and Target Rifle Australia, Sporting Clays Australia and the National Rifle Association of Australia (which has nothing to do with the NRA in the US).

Through their state affiliates, they help organise the Commonwealth Games events.  In Victoria, this means the Victorian Amateur Pistol Association, Target Rifle Victoria, Victorian Rifle Association, Victorian Sporting Clays Assn and Victorian Clay Target Association. Its the same for the Olympics and ISSF World Cups. This means SSAA Vic simply has no role in this.

The recent announcement made by the SSAA (reproduced here) is that it was they and their ‘colleagues’ who prosecuted the case to have shooting reincluded into the Commonwealth Games.

Even allowing for some interpretation over what they meant, it’s easy to see their persistent mention only of FGA and the ADA, claims of having meetings over this matter, and failure to acknowledge how the shooting events are organised suggests to us they are trying to create the illusion that they were responsible for this.

The reality is that the lobbying that was done to get shooting back into the Commonwealth Games involved submissions from the international federations such as SA.

Support from other organisations is certainly welcome, but it is simply wrong for the SSAA to claim credit in this way.

We are not suggesting other SSAA branches are involved. They are not. In fact our dealings with SSAA in other states has been quite the opposite.  We have only struck this problem in Victoria and WA where they have gone “off the reservation”. 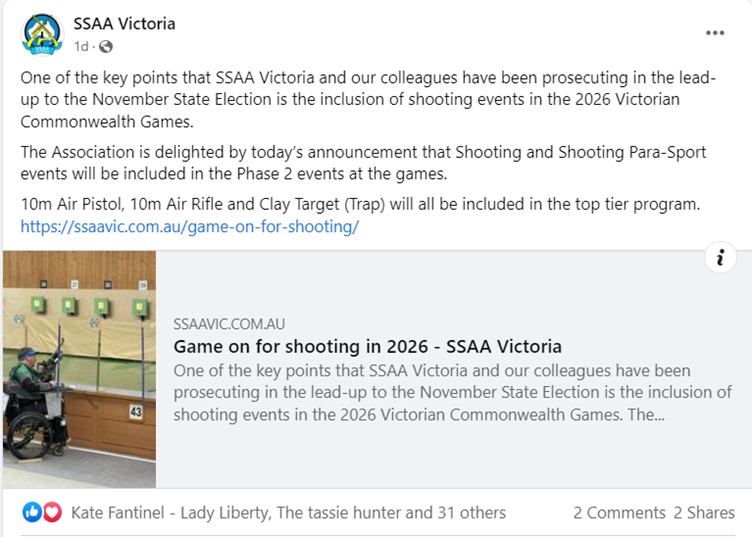 Not only was the SSAA not involved in this process, but it doesn’t seem to understand the Commonwealth Games shooting disciplines.

The SSAA was involved in a recent study conducted by the Federal Department of Health into the economic benefits of shooting. The report that came out of this was a 71 page report titled “Economic and social impacts of recreational hunting and shooting”.

You would think from the title that it would have included discussion about the Commonwealth Games shooting sports or even about the role that many organisations in target shooting in Australia play (including smallbore, full bore, pistol etc).  Of the more than 17,000 words that were in the report, only 154 were dedicated to target shooting. Here is that section.

As you can see, this section mostly talks about licensing requirements, which is not unique to target shooting. The rest of it clearly fails to explain how target shooting in Australia works.

The cynical side of us sees this as a ploy to downplay the importance of target shooting, all because of an unprofessional competitive jealousy – and with a preparedness to air it publicly.

What is also curious is why the Federal Government supported the report given it supports target shooting through the Australian Institute of Sport.

The insults don’t stop there.  The report lists the shooting organisations that organise hunting and shooting in Australia at section 3.5.  This is what it says:

Our analysis shows there around 94 shooting organisations in Australia. It is no coincidence that three of the four organisations named in this report, are the ones who the SSAA say lobbied the government on the Commonwealth Games. The only difference is that the report adds bowhunters.

This is an obvious clue as to who organised for the report to be done, in a move to elevate their own importance.

None of those other 90 organisations were listed anywhere. Not even in an appendix. That’s an extremely disrespectful thing to have done.

For the SSAA to then claim it was instrumental in prosecuting the case for shooting to be included in the 2026 Commonwealth Games takes the cake.

We’re hoping those in charge of SSAA Vic can see the problem here.  Our advice is that they need to take a hard look at their communications area and how it has positioned the SSAA relative to the rest of the shooting community. The head of that area is Barry Howlett, who was coincidently the EO of the ADA at the time that report was done.  We suggest they ask him how this happened.

Even though the SSAA named Field and Game and the Australian Deer Association as being part of their Commonwealth Games campaign, we are intrigued by the fact those other two have not followed suit in their claims.

Here is what FGA posted to the right. From our perspective this is a more accurate and respectful position for them to take.

The ADA has not (at this point in time) posted anything on the announcement which leaves the SSAA as the sole organisation making its boisterous claim.

Our advice to the SSAA Vic is that they need to start respecting the roles that other orgnanisations play and do that publicly. 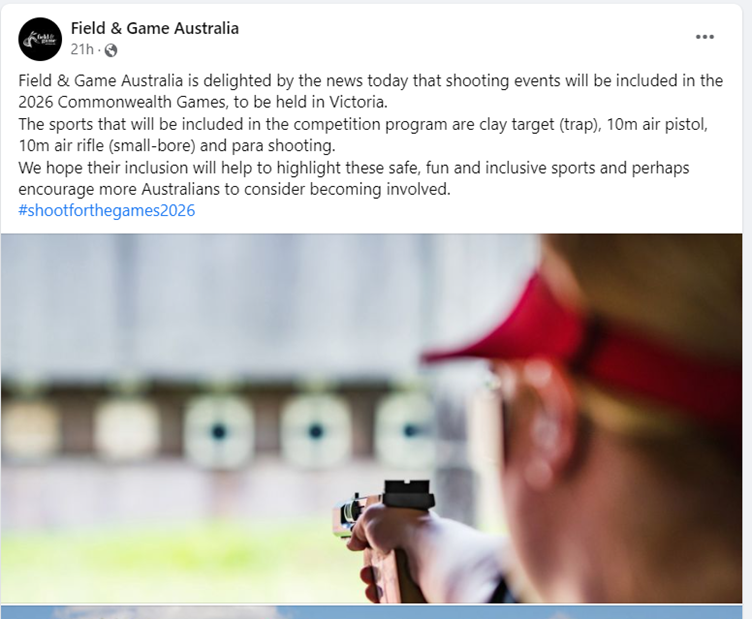 THEY WEREN’T ALWAYS THIS BAD

Several years ago, shooting organisations in Victoria banded together under an umbrella, the Combined Firearms Council of Victoria, to fight changes to handgun laws following the Monash University shootings in 2002.

It was a great piece of work in Victoria that went beyond handguns and led to benefits for shooters for the rest of that decade.

The CFCV was led by the former head of SSAA, Sebastian Ziccone. His approach was collaborative, respectful of others and achieved some great results, such as funding for range upgrades.  It caused the major parties to start releasing specific pro-shooting policies at elections.

The current leadership of the SSAA put a stop to that. This caused several organisations to walk away from the table with the evential disintegration of the unified approach. Ironically, it was this that led to the creation of the NSC by those who were unimpressed.

We’re sure that the executive of the SSAA will not be pleased to read this but they need to consider why this criticism exists.

The success of the NSC has largely been at the expense of the SSAA. It was never our intention to do this, or to harm any shooting organisation.  However we will not stand for posturing that denegrates others or the work they do (including their attacks on us) or misrepresents what happens in the shooting community.

That’s why we are fighting for truth and transparency, and why we now offer genuine reason. If you are dismayed by the behaviour of SSAA Vic, let us do the talking and switch your “genuine reason” hunting for your licence to the NSC.

Turning our minds back to next month’s Victorian State Election ….

COMING SOON: We name four Labor MPs who are working to have hunting banned

You deserve better. Click here to join the NSC

9 thoughts on “GREAT NEWS: Shooting is back in the Commonwealth Games – but look who’s claiming the credit”