Here’s a bank 82% of shooters wish would go away

It says it won’t deal with those who sell firearms, because they also sell nuclear weapons.

They also say they value honesty and transparency.  That’s where they fail.

THE NSC was recently interviewed as part of the review of the Australian Banking Association’s review of the Banking Code of Practice.

The reason we decided to get involved in this because of the way three banks have behaved towards shooters: the NAB, Bank of Queensland and Bank Australia.

While the NAB’s closure of dealers’ accounts – and then reversal of that policy – had the most coverage in pro-shooting social medial, it was the Bank Australia’s conduct that got our attention.

That’s because it sees itself as the Brady Bunch of the banking industry.

Here is a screenshot of what the bank says about the firearms industry – specifically on who we think it will affect the most: gun dealers and clubs. 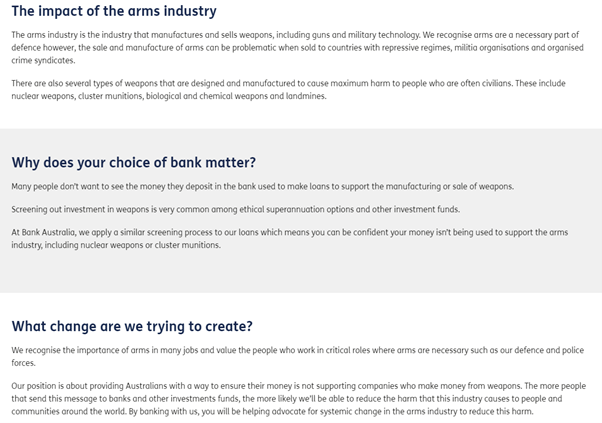 From RABBIT GUNS TO nuclear bombs

This page spends a lot of time going on about nuclear weapons – and then uses broader terms that capture anyone who sells firearms.

It says it recognises some legitimate firearm usage but doesn’t spell out what it means when its ban refers to lending to “companies who make money from weapons”.

However the title of the page makes it clearer:

To clarify what this meant – and what 82% of customers meant – we thought we’d clarify the question by asking the bank:

“Would your bank invest in businesses that trade
in firearms for hunting and target shooting?”

The response was that they would not – and the above policy applies. Their response also said:

“That research found that 82% of customers agreed

that we should not lend to [the firearms] sector.”

That rather large claim interested us, so we thought we’d dig a bit deeper.  We then asked them:

“Would it be possible for us to see the question(s)
put to the customers and what if any other
information might have been provided
– such as background, options or data?”

Surely if they were fair questions and the bank truly valued transparency, it would have no problems in sharing that information with us.

There’s no doubt we called them out – because their response was:

OUR BROADER PROBLEM WITH BANKS

That’s why we decided to participate in the ABA’s review.

It will never be possible to force banks like the BA to deal with businesses they don’t want to.

However, we’re hopeful that the review will take our advice to require banks like the BA to be more transparent when they develop policies like this – and provide for a right of review or appeal through the ABA.

If our recommendation is accepted, it will give organisations like ours the right to have bogus claims like the 82% tested by the banking industry watchdog.

Maybe that will happen, maybe it won’t.

However in the meantime if you are looking around for someone to bank with, then this is one bank to avoid.