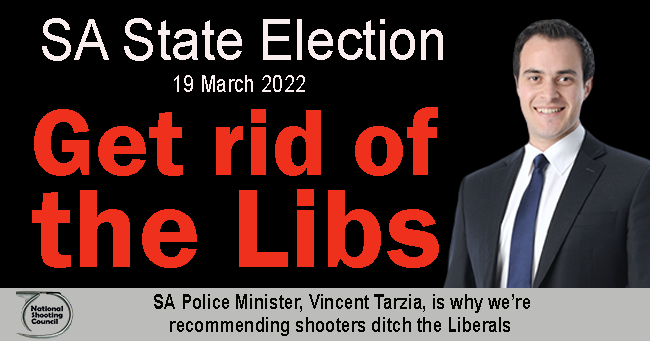 SHOOTERS in South Australia have some of the most draconian firearm regulations anywhere – and a police minister who, as far as we know, hasn’t lifted a finger to help them.

The government even has a regulation in place that requires shooters to dob in their mates.

This How-to-Vote information is MUST READ for every shooter in South Australia.

SA shooters go to the polls on March 19, with early voting already under way. This article is to help them work out who to vote for in both the lower and upper houses.  It was prepared in consultation with the Combined Firearms Council of South Australia.

This How-To-Vote advice is bad news for the Liberals because of the way their police ministers have treated shooters.

First, there’s the story of the shooter who went to his local MP for help with his licence.

His local MP is Labor’s Leon Bignell. Leon wrote to Police Minister, Vincent Tarzia, to see if he could help the guy.

Minister Tarzia flicked the matter to SA Police without responding to the MP or shooter. The good news is that the SA Police fixed the shooter’s licence issue, and we’d like to thank Mr Bignell for his help. However Tarzia’s lack of engagement in this matter left us unimpressed.

Unfortunately this is consistent with the Minister’s failure to address problems with the state’s firearms regulations, which are a major problem for shooters in SA.

Tarzia also recently oversaw the management of the decision by SA Police to reclassify the Ruger PC Charger.

We’re fighting this in the SA Civil and Administrative Tribunal however the fact that the minister once again doesn’t appear to be showing any interest, just deepens our view that the former Rostrevor Head Prefect and Dux isn’t shooter friendly, and doesn’t seem to have any intention to be.

The main issue driving our recommendations is the Firearm Regulations 2017.

These regulations predate Tarzia’s tenure as police minister, so we don’t blame him for bringing them in. However, he’s the current police minister which means he’s responsible for deciding whether they stay or go.

The way regulations work – unlike legislation which has to go through parliament – imeans Tarzia could easily remove or amend them.  Instead he’s done nothing about them that we know of.

That’s a wad of paper that, when double sided, is about the thickness of your mobile phone.

Here’s what the regulations do:

Dobbing in your mate

While we agree with the need to keep firearms and ammo secure, any law that makes it an offence to not report a loose 22 rolling around on the floor of your mate’s car is over the top.

For the above reasons, our advice is to simply vote against the Liberal Government EXCEPT as listed below.
The exceptions are: 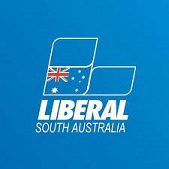 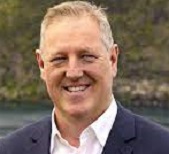 This is not an endorsement for Labor although the reality for many shooters is that they might not have any other option.  However we feel it’s important to send the Liberals the message that they need to take better care of shooters.

There are two exceptions where we do recommend shooters vote Labor. Those are: 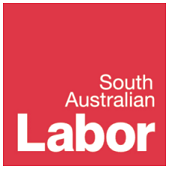 Support the minor pro-gun parties where you Can!

If you can vote for:

then put them first.  Then put your preferred major party next followed by the other – and always put the Greens and Animal Justice Party last.

SA also has an upper house (Legislative Council).  Neither side holds a majority, with SA-BEST and the Greens effectively holding the balance of power.

Our recommendation is to vote for whichever party you prefer, but we do recommend you support the candidates who have been recommended by the CFCSA.

We gave them a chance

Last year we wrote to major parties ahead of this year’s elections, including the SA Liberals.

In our letter we offered to help work with them to develop a more suitable firearms policy ahead of the election.

The Liberals did not respond, so we need to send them the message that they need to start taking shooters’ concerns seriously.

Thanks to those who helped us

This advice has been prepared in consultation with the CFCSA.

To see the CFCSA’s advice to it’s members, click on the links below:

Donate to our election campaigns

Not sure what seat your in?

Click here to check your enrolment or click here to find out what electorate you are in and where to vote.

If you want more information on the election, including the full lists of candidates, click here to go to the SA Electoral Commission’s website

Later this year, we’ll be posting How-To-Vote advice for the Federal election (May) and Victorian State Election (November).