Is this Queensland registry officer a “fit and proper” person?

THE QUEENSLAND POLICE WEAPONS LICENSING BRANCH (WLB), seems to be no stranger to making questionable choices.

One of it’s own officers who has been responsible for vetting licences, has a history that raises a question in our mind of whether it is appropriate for her to be making those judgements.

“J” is an NSC member and has held a QLD pistol target shooters licence for 15 years. She has also held a security pistol licence for four years.

J has an unblemished record and understandably shocked when her application to renew her security pistol licence was refused.

The reason given to J for the refusal was that it was “not  … in the public interest” to hold a security pistol licence because her partner is alleged to be a member of a Queensland Outlaw Motorcycle Club.

The letter also alleges J is not a “fit and proper” person to hold a licence. The reason given is that she “associate[s] with persons who are currently or have been the subject of disqualification from holding or applying from firearms licences”, which we take to be a reference to her partner.

Yet her partner has never held or applied for a Queensland shooters licence.  He has NOT been the subject of a Firearms Prohibition Order, and has no criminal firearm history. 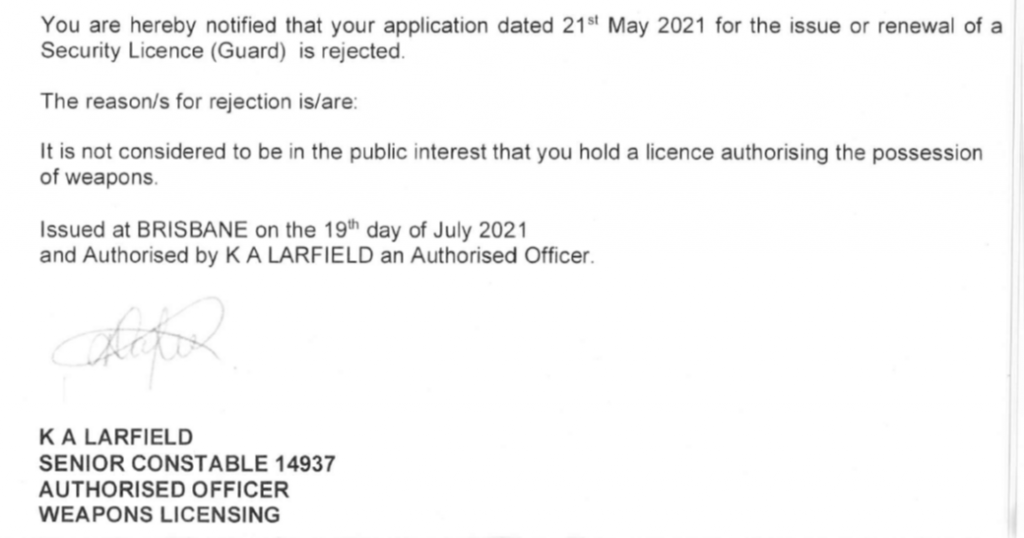 However what grabbed our attention about this matter was who made the decision.

Senior Constable Kylie Anne Larfield made a character judgement about J’s suitability to hold a security licence.  However her own history similar questions our minds about why she is allowed to be able to do this. 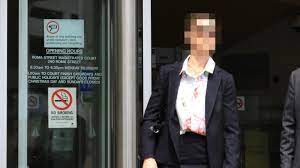 In 2016, Ms Larfield pleaded guilty to charges concerning the shoplifting of $80 worth of items from the Brookeside Coles in Queensland.

As part of the plea submissions, her lawyer stated that she didn’t use the self-checkout properly.

The case was reported in the Brisbane Times newspaper [click here to see the story].

Ms Larfield was discharged without a fine or conviction, despite pleading guilty at her plea hearing.

We can accept that people may not always scan an item properly.

However it was a mistake that the story says she managed to make seven times.

Then they go for her target shooting licence

On 4 August,  J“ was advised by the WLB that her application to renew her Category H pistol target shooting licence which she has held for 15 years, had been rejected for the same reason.  The letter she received states:

On this occasion, the notice was signed by another officer.  However this would appear to us to have been a consequence of J first losing her security licence, which was determined by Senior Constable Larfield.

The 2016 story by the Brisbane Times about Constable Larfield mentions that she was suffering a medical condition due to workplace issues.

Given the way the WLB judges shooters, this does not call into question what is “fit and proper” for one of their own, then we wonder what does?  To give you an idea of how keen WLB is to target shooters, readers might recall this story where it had allegedly been pursuing shooters’ medical information, to find ways of suspending or cancelling their licences.

Now someone who pled guilty to stealing groceries works for them.

J has filed her appeal to QCAT, and will be represented by the NSC’s Barrister.

We understand there are 500 odd appeal cases before QCAT at the moment pertaining to firearm licences.

By fighting for her licences, we are confident J can get her security and cat H licences renewed, as she has done nothing wrong.

If this happens, then it will further expose just why Queensland Police are using cops who have blemished histories to vet people who do not.

We will keep you updated as the case progresses.

9 thoughts on “Is this Queensland registry officer a “fit and proper” person?”