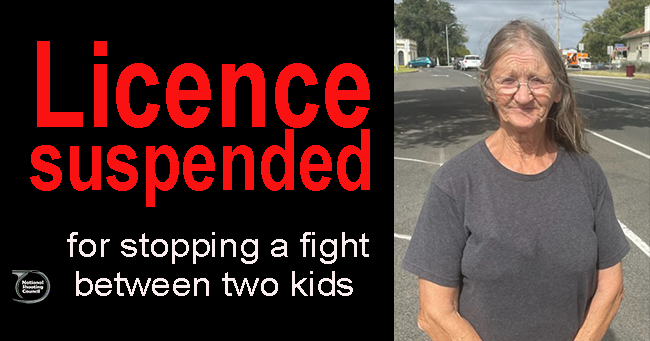 IN A NEW LOW for Victoria Police, a local district firearms officer has decided to take a licence and firearms off a 74-year-old pensioner after she stopped two kids – aged 7 and 4 – fighting each other.

In fact the seizure notice was not completed properly, suggesting the actions of the officer may not only have been unlawful, but casting doubt on whether he is able to do his job properly.

Jenny C is a 74-year-old retired pensioner living on the Bellarine Peninsula and has legally held firearms since 1970. She has an unblemished record and states she has never been in any trouble with the police.

About 6 months ago a young couple with 3 children moved into the house next door.

Jenny hadn’t had any problems with her new neighbours, so when the 7-year-old  started punching into his 4-year-old sister in their backyard, Jenny put her head over the fence to tell them to stop fighting.

That’s when the children’s mother came out.  Apparently infuriated, she gave Jenny a verbal spray.

Shortly after this, police turned up at Jen’s place to seize her guns and suspend her licence.  They served her their paperwork indicating it was their intention to cancel her licence.

The attending officers told Jenny that they were acting in response to a complaint from the children’s mother.

At the very least you would think common sense would have prevailed and local police would have interviewed Jenny to find out what actually happened.   Or maybe they could have spent more time asking the angry mum about the backyard squabble.

The NSC knows from past experience that if police had any concerns about Jenny being dangerous to her neighbour or the children, an intervention order (IVO) would have been obtained by Police and served on Jenny.

If police believed they didn’t have grounds as the applicant for such an IVO their advice to Jenny’s neighbours would have been for them to attend a local Magistrates Court and apply for an IVO themselves. They didn’t do this.

Instead, like Ron Sterry in the NT, the police took the lazy way out and went after the samaritan shooter.

The NSC will support Jenny through this case, as it’s obvious that the grounds for suspension are weak. In fact they’re the weakest we’ve ever seen.

The NSC’s legal counsel has been briefed and we’re going to help Jenny take this matter through internal review, and the Victorian Firearms Appeal Committee and VCAT if need be.

The Victoria Police suspension notice served on Jenny requires her to provide reasons setting out why her licence should not be cancelled.

The notice states she is not a ‘fit and proper person’ to hold a licence, but does not say why.

The field that is provided to state the grounds for the suspension is even marked ‘mandatory’, but in this case, it was left blank.

The fact Victoria Police took action in this case is one thing, but the lack of discipline around providing a proper notice is, in our view, unprofessional.

Jenny’s “warlike “arsenal consisted of a single 22 and two 177 air rifles. To add to the disgraceful way VicPol have handled this matter, the officer indicated on the paperwork that only Jenny’s licence has been seized, not her guns.  Yet they took both.

Vic registry’s control over the DFOs

If the police think that going after a 74-year-old for this is worth their time responding to, then it’s clear that something is wrong at VicPol.

It shows the Victorian registry needs to provide significantly better guidance to their district firearm officers, and make sure shooters who have done nothing wrong are left alone.

We will be raising this matter with Minister Neville (who can be contacted at lisa.neville@parliament.vic.gov.au) and asking her to ensure her constituent is treated fairly and properly by VicPol. We’ll be interested to see who she backs.

Prior to any of this happening Jenny had started the process of moving, having listed her home for sale.

While it is possible she may move before this matter is resolved, the NSC will continue to work with her to clear her name.

Wherever Jenny moves to, we will support her until her licence and firearms are returned and her name is cleared.

This is an appalling way for a registry to treat shooters.

Unfortunately, the only way we can change this is by sending a clear message to the government by shifting votes at the next election – which, for Victoria, will be on November 26 this year.

The good news is that this is now not too far away – and we hope to get some good outcomes for shooters through the election process.

Help us fight for shooters like Jen. Join the NSC.

Just enter your email address here – and you can opt out at any time!

"Mate I find all this very frustrating and seeing my lifestyle choices impacted (removed and restricted) every day by laws made by these kinds of people really annoys the heck out of me – especially so since I do not go out of my way to break the law or hurt or negatively impact on others.Honestly, I am sick of being dictated to by these immoral hypocrite Marxists; how I should live, what I can and can’t do, how I should morally think even."