Labor candidate runs to the media over the NSC: Papalia labels us the ‘Australian NRA’ 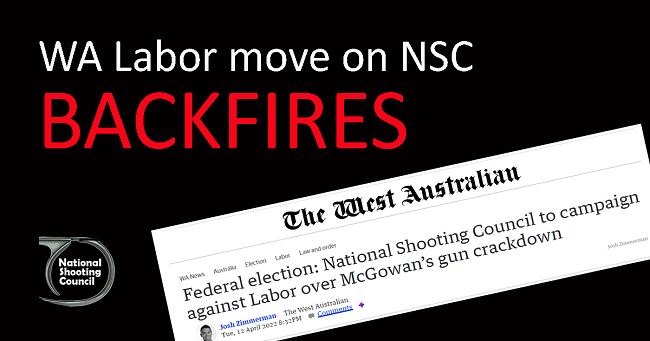 The West Australian newspaper has run an article on the NSC in what must be one of the dumbest moves by Labor politicians against shooters that we’ve seen for quite a while.

A couple of days ago, we sent emails to Labor candidates contesting next month’s federal election in WA, to let them know why we were going to recommend to shooters in that state that they vote against Labor.

The message was simple.  While guns are a state issue, we were taking advantage of the federal election to persuade Labor candidates of the need to convince their state counterpart, Police Minister, Paul Papalia, of the need to change his tune on guns.

You might recall that Minister Papalia is proposing to change WA’s gun laws to cover up for the regulator’s own incompetence in running legal cases.  Click here to see our earlier story.

“It is our request that you put as much pressure on Minister Papalia as you can to come into line on firearms.  All we want is good regulation and a decent platform for dealing with firearms policy.”

Labor candidate runs to the media, scared of shooters

Then we received a call from The West Australian newspaper, who had a copy of our email.

In other words, one of the candidates – and we’re pretty sure we know who it was – gave the email to the paper and made statements about us being the Australian NRA.

The article, which was published on 13 April, reads:

A pro-gun lobby group is threatening to run political campaigns against Labor candidates contesting WA seats at the Federal election in retaliation for the McGowan Government cracking down on firearms ownership.

The National Shooting Council — founded in 2019 to “focus solely on the political problems facing shooters” — has contacted Labor MPs and candidates to warn them gun owners will be urged to preference Labor last.

“This is to advise you that the National Shooting Council has decided to recommend that shooters in WA vote against Labor which obviously affects you,” Mr Jenkins wrote. “It is our request that you put as much pressure on Minister Papalia as you can to come into line on firearms.”

NSC vice-president Pete Zabrdac told The West the group planned to distribute fliers to homes in Cowan, Swan and Pearce — each viewed as a battleground seat that could fall to either of the major parties.

He also rejected the comparison to the National Rifle Association in the US, which he described as a “totally different animal”.

Mr Papalia insisted the NSC was “essentially Australia’s NRA” and that he would not be intimidated by their actions.

“They behave like them, they use the same tactics and it is very disturbing,” he said.

The online version of the story contains the additional claim by Papalia:

“The incredible gift to the nation from John Howard, in terms of the National Firearms Agreement, has served us well and could be further complied with in our State.”

So there you have it.  WA’s Police Minister, believes what Mr Howard did was an “incredible gift to the nation”.

Yet Mr Papalia is reviewing the state’s gun laws which can only mean that the incredible gift wasn’t all that incredible.

What is also apparent to us is that Papalia obvoiusly considers us to be a stakeholder in the WA firearms community.  Yet the consultation his government is running does not include us.  That will be because we’re happy to ask the hard questions.

As we did in NSW last year, the NSC is getting ready to have flyers distributed to every house in Papalia’s electorate a few days before the federal election.

We’ll also be putting out How-To-Vote advice for shooters Australia-wide, including with a strong focus on WA.

Stay up to date with what we’re doing.  Click here to check out our videos at NSCTV which will become the go-to place for everything political that matters to shooters.

13 thoughts on “Labor candidate runs to the media over the NSC: Papalia labels us the ‘Australian NRA’”