VICTORIA:   MELTON MP, Steve McGhie, could regret this recent dig at us during a recent sitting of Parliament.

The MPs words came during the recent debate over gun law changes which included the extension of 10 year gun bans and new requirements around what safes shooters could use.

McGhie decided to use the cover of Parliament to vent his disdain for what we do.

Then he told his constituents about his negative attitude towards guns, while forgetting that he’s in a marginal seat where there are many, many shooters.

McGhie spoke on the legislation, saying that ‘firearms stakeholders’ had been consulted on the changes.

As we now know, that is not the case.

In addition to the calls we fielded from shooting organisations who were concerned about the legislation, Field and Game Australia put this advice out to its members, making it clear that they were not consulted on critical aspects of it.

McGhie’s claim mirrors the statement by Frankston MP, Paul Edbrooke, we reported on in this article, where he claimed shooting organisations were “were involved in actually making this legislation”.

It’s just another lie that the Victorian Labor Party peddled to shooters in 2021. 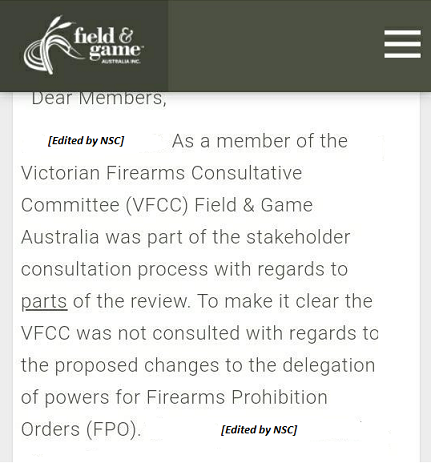 Going after the NSC

Not content, McGhie decided to single the NSC out.

In his speech, he said:

“There are some misconceptions about this bill that have been circulated among the licensed and legitimate firearm community (pushed by the National Shooting Council, a fringe group that is seeking to divide legitimate firearm representative groups and associations).”

As for dividing groups and associations, that is a clear fabrication.  As many of you will know, we reveal bad behaviour by both regulators and those on our side of the fence.  We also run legal actions to protect the interests of shooters – and we do this on a national scale.   We’ve worked with many groups and associations and continue to do so.

McGhie’s problem seems to be that we’ll ask the hard questions whenever bad laws come up – and take action where needed.

McGhie doubles down on the NSC

McGhie didn’t stop there. He said of the ‘misconceptions’:

“These claims include new powers associated with FPOS, claiming that any police officer can slap a 10- year ban on legitimate and law-abiding firearm owners, that FPOs will be used to take firearms off people for speeding tickets and CHO breaches, or because a police officer has a grudge against someone.

Actually, they are true.

The information we received that formed the basis of our story came from within Edbrooke’s committee.  We have also published several of stories where police have targetted shooters for speeding tickets and CHO breaches. 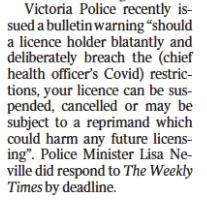 Readers might even recall the story of how one shooter’s licence was suspended after receiving a COVID fine that had been issued in error, then withdrawn.

Here’s an excerpt from the Weekly Times that confirms how trigger happy VicPol has been to target shooters so over trivial matters:

The rules around the 10 year gun bans (called FPOs) only require that police need to disapprove of the person’s ‘behaviour’.

The legislation doesn’t define what that means, or require that the conduct is even illegal.  It is extremely open-ended.

After McGhie made his statement, an upper house MP later admitted to parliament that gun bans had already been imposed on several licensed shooters – which puts McGhie at odds with what VicPol have done.

Hardly a suprise, McGhie also put out this video on Facebook covering a range of matters, where he says at the 2:30 mark: “I’m not a pro-gun person” yet he offers strong opinions on the shooting sports

That’s someone who chooses not to ‘stay in his lane’.   It’s also something worth remembering if you are a shooter in the Melton area.

The next 12 months will see elections in South Australia, Victoria and Federally.  The approach for the Victorian election will see us targetting several seats, including at a couple that are Labor.

While we are not going to necessairly support the coalition, our position is based largely on the way the Andrews Government has treated shooters over the past few years.  We’ve had gun shop closures, reclassifications, more gun restrictions and a portfolio minister who simply doesn’t engage with her portfolio.

High on our list is Melton.  McGhie’s views on firearms has guaranteed it.

Nominations for Melton have closed and we understand McGhie – who was supposed to be there as a seat warmer – has put his hand up.

What we haven’t worked out yet is just how many seats we’ll get involved in at the election. Our advice to Labor is to consider how much of a liability McGhie will be for the party.

Voters in Melton can expect to hear from us in the new year.

We go after bad MPs. Join the NSC