OVER THE PAST FEW DAYS, we have published blogs that are producing social media results we could have only hoped for a year ago.

What has also become clear to us is that more and more shooters are seeing the value of getting behind our campaigns.

The first result we want to mention is the fundraiser for Ron Sterry, who is up on gun charges for protecting himself when he went to a neighbour’s aid.

This post which we promoted through Facebook was shared more than 1,600 times, received over 7,000 reactions and 1,200 comments.

If you aren’t familiar with Facebook, these are pretty impressive numbers – all of which are genuine (none of the stats were ‘bought’) 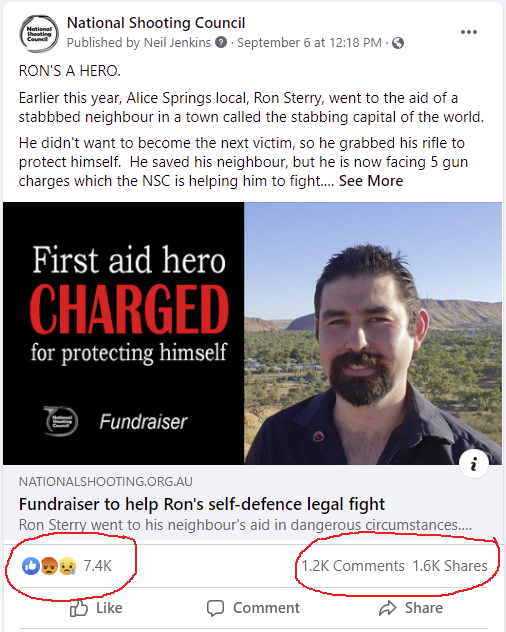 Another story that drew a fantastic reaction was the story we broke about new gun laws that the Andrews Government introduced into the Victorian State Parliament.

The new laws will make it easier for police to ban gun ownership based on nothing more than unapproved ‘behaviour’ or ‘associations’.  The laws come with no safeguards which means they could be applied to anyone – whether or not they are a gun owner.

Getting get a ban subjects the person to warrantless searches for a 10 year period and there is no right of appeal for the first five years of the ban.

In the story we encouraged readers to let the Victorian Police Minister know that these laws need to be changed.  This resulted in over 800 emails being sent to the Minister that we got copied into.

Here’s a screenshot of our Outlook inbox folder set up for those emails:

We reckon she got the message ….

It’s great to have solid social media coverage, but at the end of the day, the shooting community need real results.

We not only need better gun laws, but a better relationship with the government so that we can grow as a sport or pastime.  We need to put a stop to shooters becoming a battering ram for some cheap media headlines – and respected for what we do.

Getting to where we need to be, can’t be done unless we establish a solid presence.  While this coverage is only a stepping stone to getting there, it is nevertheless a good indication of the direction we are going in.

This is all from your support. Thank you for standing with us.

Support our work. Click here to join the NSC.