THE NSW GOVERNMENT is refusing to be transparent about why it is giving DVA card holders a hard time when they apply for a firearms licence.

In this article we explain what the NSW Parliamentary Secretary for Police and Justice, Mark Taylor MP, said to the NSC when we asked him to ensure the registry provided greater transparency.

Setting the trap for our vets

In April 2021, we published this story where we revealed how the NSW Police were offering fee exemptions to DVA card holders, but then demanding they prove they are medically fit to hold a licence.

We’ve heard stories of how some vets who fell for this carrot now have to provide psychiatric reports every time they renew their licences – despite being ‘in the clear’.

Section 11 of the NSW Firearms Act 1996 requires that shooters are ‘fit and proper’ to have a licence.  On face value, that’s ok where it helps to keep bad or dangerous people out of our sport.

However the NSW Police are now starting with the biased assumption that you are not fit and proper until proven otherwise – if you hold a DVA card.

Check this screenshot that one DVA card holder received.

It’s pretty clear: claim the discount and get given a hard time. All because you served our country. 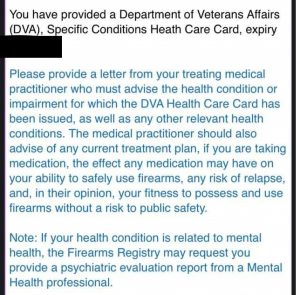 NSC challenges the government to transparency

In May, the NSW Parliamentary Secretary for Police and Justice, Mark Taylor MP, confirmed this policy. He explained that NSW Police adopted this policy for vets to:

In reply, the NSC advised Mr Taylor of its concerns about compliance with the state’s information disclosure requirements, especially in the absence of any disclosure to taking up the fee exemption.

In late July, Mr Taylor responded. You can see his response by clicking here. In summary, Mr Taylor’s response makes no mention of transparency, which was the sole focus of our email. All his response did was to reiterate the justification for the policy.

In other words, Mr Taylor avoided the question.

The fact Mr Taylor’s response didn’t respond to the question is telling.  It was a simple request that focused on a key principle of good management of private information.

We’ve raised our concerns with the Information and Privacy Commissioner NSW, asking it to look into whether the conduct of NSW Police complies with the privacy priniciples they administer.

Thinking of using your DVA card to get a fee exemption?

Until we get this sorted out, our advice to those who may be eligible for the fee exemption is pretty straight forward. Do this, and be aware that NSW Police will give you a hard time.

Obviously we’ll let you know what happens – but if you’re a vet, you can do your bit by raising your concern with your local member of Parliament.

This tells us quite clearly that it is the NSW Police, not the NSW Government, who runs firearms policy in NSW.

In saying this, we’re not criticising Mr Taylor for responding (he did sign the letter). To the contrary, we appreciate the fact he is corresponding with us, as he has done on several other occasions.

However, we know who ‘wears the pants’ on firearms policy in NSW, and that’s got to change.