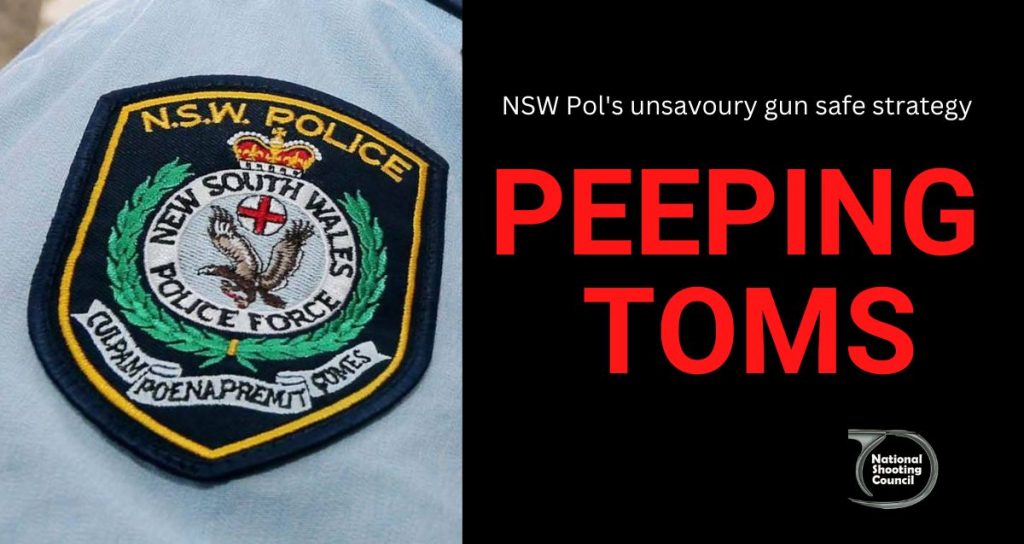 AN OFF DUTY COP who couldn’t help himself but to peek into someone’s window has led to a bizarre set of accusations against a shooter who was only cleaning his gun.

The good news is that the problem has gone away – but it exposes ongoing bad behaviour by the NSW registry.

The story starts in Sydney’s inner west when, as we understand it, an off-duty cop was passing a house when he or she saw a gun being cleaned inside the owner’s home.

The owner, K, then received a call from a female officer from NSWPol’s nearby station.

The officer asked if his safe is bolted to the wall. K’s safe weighs 153kg empty, so he said bolting was not required.

The officer said the safe should be bolted down “because people can put it on the trolley” and that she would fail him for an inspection if it was not bolted down.  K then corrected her by drawing her attention to information published on the NSWPols’s firearm registry website.

A Peeping tom with a badge

The officer then said an off-duty police officer saw a gun through K’s window and that it was pointed towards the window.

K told her that he was cleaning the gun on a desk next to a window but the muzzle was always pointed towards a wall or upward.

As you can see by this picture of K’s house, it would be possible to see into the window, but whether it is something a person holding a badge should be doing, or to even be concerned about, is debatable.

The officer went on to question whether he was fit to hold a firearm licence, that it sounded like he was “flipping” the concern off and that would be a reason to disqualify his licence.

NO DANGER, NO OFFENCE, not even any paperwork

K was cleaning his gun, on a desk next to a front window in his own home.  The more cynical of you might wonder if K in fact pointed the gun out of the window.

However, if the officer saw this or perceived any form of danger, he or she could have easily been able to do something about it.  For example, have his or her colleagues front up with flashing lights. Or kick the door down.

However, there was none of this.  There was no statement to that effect, no knock on the door and not even any charges.  In fact there is no information to suggest that the gun was even seen by any member of the public.

What this tells us is that K was doing exactly what he said – cleaning his gun and minding his own business.

K does agree that it might have helped if he had closed his blind, but whether that is necessary will depend on each individual situation.

In fact, this is reminiscent of the actions of the NT Police who peered into Ron Sterry’s windows and based a raid on seeing nothing more than a chemistry kit. Click here to see that story.

K told us that when he spoke with the female officer, she was combative and aggressive, and K sensed that she was trying to trip him over.

The officer said there was a criminal investigation into this taking place, and it was “hard to make a judgement without actually seeing your place so it is actually better for us to talk in person”.  In our book, that’s code for saying that she was looking for a reason to suspend or cancel K’s licence.

That’s when he contacted the NSC.  Consistent with the advice we give every shooter, the only reason police will engage in a conversation is to get something that gives them a reason to take action against you. Without being impolite, remember, that is what they do for a living. Our advice, as always, is if you have any doubt or concerns, see a lawyer.

As you will have seen from Episode 13 of NSCTV, the odds of an interaction with the police ending up well improve significantly when you get a good lawyer.

As a result, K engaged the services of Nick Gad. https://gadco.com.au/  According to K, Nick spoke with the same officer and also sensed that she was combative and was reportedly “just trying to use anything she could grab hold of to disqualify” K from holding his licence.

Importantly, Nick confirmed that the officer said there was no criminal investigation taking place.

Despite this, K agreed to a safe inspection.  Nick attended the inspection, and we understand it went smoothly without a hitch.

The officer apparently told Nick that she only wanted to give K “a lecture about gun safety” as the result of someone seeing guns being pointed towards the window.  In other words, her actions were pure bluff.

K’s view is that Nick’s experience in dealing with the police saved the day, and without his help, the matter “could have turned into a disaster without his involvement”.

When the police call

Our advice is to always be polite and courteous to the police. Help them when they need help and always comply with lawful directions.

However, remember that when they turn their attention to you and try to engage in a conversation, there can often be a loser in what happens next.

Here’s a great video on this, including what to do and not do. It’s had nearly 18m views: there is a good reason for that.

If you do become the target of their attention, don’t cut corners – get a lawyer.

Back the NSC. Click here to join us now.