The documents also show the reasons WAPol orginallly banned the gun was because, among other things, it might become popular and believed it was a “poor competition gun”.

Earlier this year, we won three cases in the WA State Administrative Tribunal (SAT) against the reclassification of the Ruger PC Charger to category D, which we reported in this story.

We followed this up with an FOI application to reveal the basis of why the gun was banned.  Now we have the response.

In June 2020, WA Police reclassified several firearms, including the Ruger.  It’s argument was that it was “not in the public interest” for the gun to be licensed in WA.

After filing three challenges in the WA SAT, we also put in a FOI request to get to the bottom of why WA Pol formed that view.

WAPol initially refused to provide documents and respond to a request for an internal review, which we then took to the WA Information Commissioner.

While that office became difficult to deal with, we decided to go back to WAPol for a second go at seeking an internal review. To our surprise, WAPol accepted this, which led to a wait that turned out to be worth it.

A change of mind

The internal review resulted in a decision to overturn the original decision to deny documents to the NSC.

As a result, we received 5 documents.

The decision to ban the gun

The original decision to ban the gun started when a member of the WA Firearm Traders Association decided to raise questions about the gun with WAPol.   While the trader probably asked the right question of the gun, it set off a chain of events that then led to several guns being prohibited.

WAPol then made inquiries about the gun, however it would appear that it was never actually inspected.  This might be because the registry did not have any records of the gun being in WA at the time.

In arriving at its decision, WAPol made assumptions that shooters in WA would find a way around the laws against modifying firearms to category D (i.e. self-loading military style longarms), by stating:

This appears to be the main reason WAPol banned the gun.

While we can understand the logic of concerns where a firearm can be easily converted to category D, it is insulting to suggest that licensed shooters would circumvent the law through mail order.

There are significant penalties for illegal modifications and owning firearms that are not in the right category – which means WAPol has the laws it needs to pursue those who do the wrong thing.

This should have been enough to drop the matter, but they instead relied on an assumption that had no basis.

The NSC’s ‘real likelihood’ of winning the legal fights

The documents we received suggest that WAPol didn’t get around to inspecting the firearm until after the NSC lodged it’s three appeals.

They suggested that our case was stronger than we thought. In a brief to the same senior officer who banned the gun, the internal advice stated:

The brief also stated that settling the case outside the SAT addressed three issues of concern to WAPol.

None of the reasons cited by WAPol are consistent with the National Firearms Agreement.  They do not support anything that is consistent with how firearms are classified in any other jurisdiction.

While it was the applicants’ wishes to settle their actions on the basis of modifying the firearm to satisfy WAPol, we’re now very confident that a challenge to licence the Ruger PC Charger, unmodified, could succeed.

However, for now, we’re happy to hand this back to the WA FTA, where this all started.

The updated advice that WAPol sent out in October last year confirming the status of the Ruger is yet to be updated.   The advice currently reads: 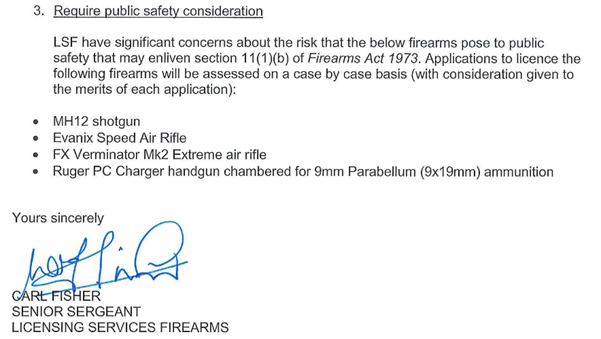 Every legal fight we have taken against a gun ban has been successful in one way or another.

WA Police clearly didn’t have any reason to reclassify the Ruger, and we are seeing similar problems in other states, most notably NSW and SA.

Readers might recall our recent story that the only justiifcation the Feds had for appearance laws were three incidents – all involving replica firearms and one of them not even being in in Australia.

What is clear is that our challenges are showing up the problems and flaws with the current approach – and legal challenges are viable and worth pursuing.

What we would like to see from our lawmakers is some leadership on reclassification, starting with scrapping appearance law. This will add certainty for our suppliers and go a long way towards ensuring a more uniform system of firearm categorisation across our states & territories.

The best way to help us fight bad laws is to join us. Click here to join the NSC!