SHOOTERS in two upper house seats in Tasmania will go to the polls in early May.

This guide will help shooters in the northern seat of McIntyre work out who to vote for. 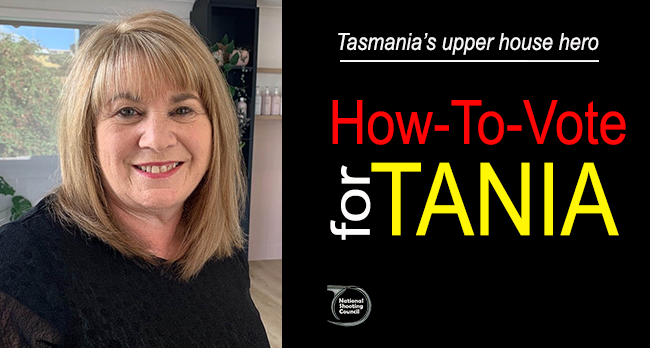 why this matters to us

Each year, voters in two or three upper house seats go to the polls to elect representatives for six years. Upper house elections on the mainland tend to coincide with the date of the general election, however the Tasmanian system is staggered.

The NSC would normally not get involved in elections that are that local.

However, the Government’s ban on school kids engaging in organised clay target shooting as an off campus activity on the basis it carries a ‘risk of injury’ and promotes ‘violence and aggression’ deserves a political response.

Click here to see our original article on this matter.

What makes this even more important for us is that the former Premier, Peter Gutwein – who was a patron of a club before becoming premier – bought into this matter by standing up for the dud policy.

The main seat of interest to us is McIntyre.   That’s because it is in the north of Tasmania, which is rural.

The sitting MP is Tania Rattray, who was first elected in 2004 as the member for Apsley and last re-elected in 2016 for McIntyre after boundary changes.

Tania has been a strong supporter of clubs in her area, including the Tasmanian Clay Target Association, of which she is a patron.

Not only that, but here’s a question supporting shooters that she asked in parliament in October. 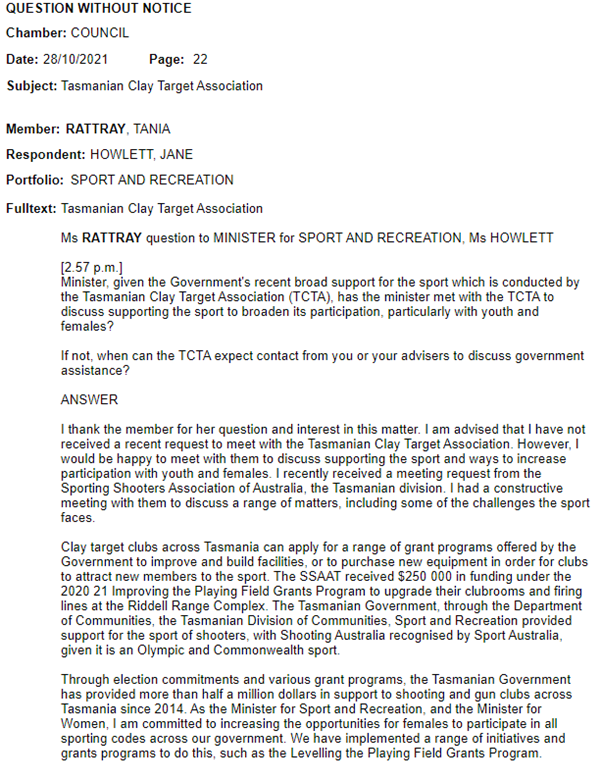 Tania’s obviously onside and can help us get the Tasmanian Government to change its tune. However she needs your help, as she only previously got up on preferences.

Plus, there’s a move to establish a new range in Meander Valley (within McIntyre) for the Kentish Rifle Club, which Tania can only help with if she gets re-elected.

So if you’re a shooter in McIntyre, then we ask that you consider giving Tania your first vote.

If you have mates who live there, please pass this onto them, so they know who to vote for.

Maybe then Gutwein will change his tune

Even though the election is not due until 7 May, ballot papers were sent out early to allow voters to vote early from 11 April.

CLICK the image to your left for a larger version.

The other seats being contested are Elwick and Huon.  Elwick is a relatively urban seat near Hobart where the vote for shooters is not strong.

As we developed this information, we consulted the Tasmanian Branch of the Shooters, Fishers & Farmers Party.

As many of you will be aware, we have locked horns with the SFFP on the many occasions in the past, however our experience with the Tasmanian branch has been different.

Unfortunately, the SFFP is not running any candidates at these elections, but we do look forward to seeing how we can help them at the upcoming Federal Election.

Help us support the right candidates. Join the NSC