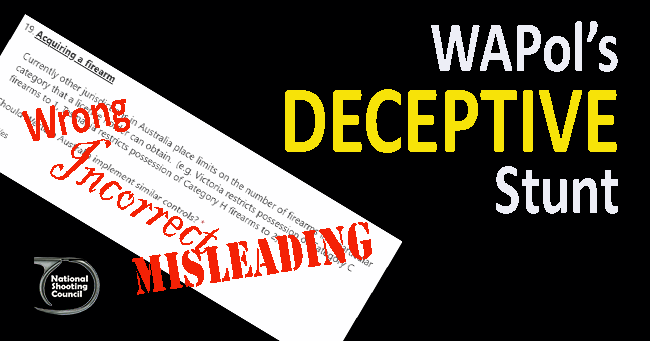 The NSC has caught WAPol out again in its deceptive push to overhaul the state’s gun laws.

A few days ago, we revealed that the push to rewrite the Firearms Act is due to the police’s own incompetence in managing challenges in the state’s legal system.

Following the recent announcement of the overhaul by Police Minister, Paul Papalia, WA Police released a survey to a small range of firearm groups to gauge their responses to various changes that could be made to the state’s gun laws.

The article we published included screenshots from three of the questions that provided clear indications as to what the government was considering, including the significant proposal to limit then number of firearms that a licence holder can obtain.

One of the key questions, which you see here, is clearly being justified on the basis of restrictions that WA Police say exist in other states, namely Victoria and Tasmania.

However, the information provided is incorrect

The question claims that Victoria limits Category C firearm ownership to one. This is not the case.

There are many shooters who have 2, 3, or 4 Category C shotguns for different clay target shooting disciplines such as trap, skeet and sporting clays.

In other words, the limit simply does not exist.

After the first six months of being licensed, licensees can  have two handguns of a different calibre. After 12 months, there is no limit on how many handguns a licence holder can legally acquire.

This is careless work on the part of WAPol, especially as the question will mislead those it is intended for.

The proposal by WA to limit the number of firearms is also inconsistent with the National Firearms Agreement, which does not impose those limits.

The only requirement under the NFA is the demonstration of genuine reason, which any legitimate shooter in WA will be able to provide.

It is another demonstration of why the WA registry is less than effective, and unable to back the claims it makes.