How WA shooters got thrown under a bus

“The management committee of the WAFTA decided it did not want to be involved with the NSC.  A decision was also made that the WAFTA was not going to respond to any NSC correspondence.” 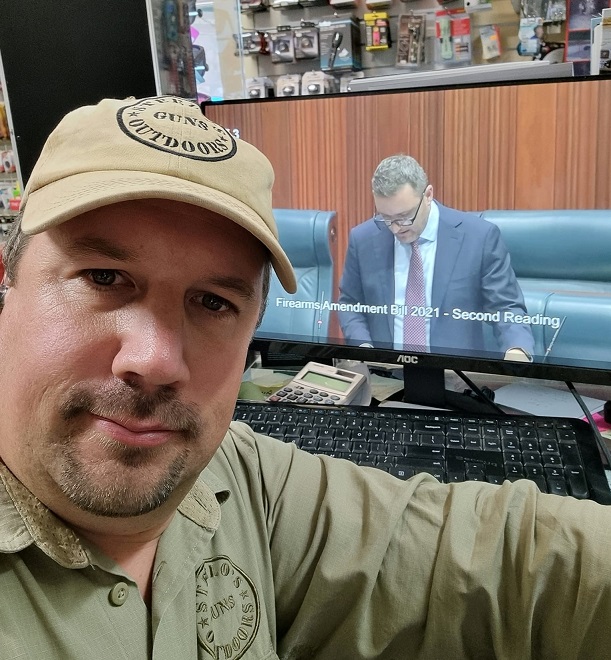 BEVAN STEELE is a former WA police officer, gun dealer and the president of the WA Firearm Traders Association (WAFTA).

He is also a man with political ambitions, having stood as a candidate for the Shooters Fishers Farmers party at the last WA state election.

Steele hates the NSC with a passion and it seems to be no coincidence that his attacks on the NSC ramped up since he secured a position with the SSAA as its public relations officer.

Our offer to WAFTA to help the shooters of WA

You will recall that at the start of the pandemic, the three labor state governments in WA, QLD and VIC ordered the closure of their gun shops.

They did this, claiming “that the closure of gun shops was as a result of a decision of National Cabinet”.  However we knew that was false because there was no communique from the Prime Minister’s website referring to it.  In other words, National Cabinet made no such decision.

We found a journalist who the ran the story on the front pages of four national newspapers exposing the myth, in what has been one of our proudest moments.

The NSC was quick to challenge the closures. As the NSC was not a gun dealer affected by the closures, we needed to find dealers who were prepared to be the applicants in  the proceedings, with the NSC providing the lawyers and covering the costs.

We found dealers in VIC and QLD immediately and commended proceedings straight away.  We also wrote to WAFTA explaining our plan and asked for their help to see if one of their dealers was willing to be an applicant for our case in WA.

We received no reply. Getting our gun shops open

This wasn’t the only thing that WA shooters were up against.

In June 2020, WAPol and the WA government announced 7 firearms were going to be reclassified, such as the Precision DSR-1 and Desert Tech SRS A1 rifles, and the Ruger SR22 pistol. It was the biggest “gun grab” ban we had seen in years which we were determined to fight.

Again we wrote to WAFTA without any reply – so we wrote to one of our contacts directly.  Here’s what we said:

Hope you and your peers in WA have bounced back as best you can after the recent restrictions.

Obviously, you will be aware of the new restrictions (prohibitions) imposed by WAPol. The NSC is looking to start at least one new legal action in WA.   We are funded and ready to go for it but our problem is that we don’t yet have an applicant for it. We would be happy to start the action but given we don’t own or trade firearms in WA, means we are not directly affected by the decisions: we need an owner or a dealer who is.  The decision was made on 5 June so if we are to file, then we would prefer to do so within 28 days of that date which gives us no more than 2 weeks to get it done.

Are you able to find someone who might be willing to be the applicant?  We will pay the bills and are happy to give WAFTA as much billing in this matter as it wants, or it might prefer not keep it head down given it deals with the registry – it’s your call.

We are hoping to be able to run with this action, not only because of the issue that is underneath it, but the fact that your state election is now nine months away and we would really like to be able to focus shooters and MPs minds on the problems that you have on your side of the border to build some electoral mileage.  If we win, that’s great, but if we lose then it stills enable us to run a political campaign around it.

Can you please let me know if you guys are interested n working with us on this – and if you can find me an applicant or two (as dual actions would cover different firearms).  Our preferences are to cover the C-More Competition M26 and Ruger PC Charger chambered for 9×19, but we’ll consider any action)

Here’s what we got back:

Thanks for your email.

Unfortunately I cannot speak on behalf of the WAFTA.  Please don’t take what I’m about to say as personal or that it is coming from me personally, as I will explain.

The management committee of the WAFTA decided it did not want to be involved with the NSC.  A decision was also made that the WAFTA was not going to respond to any NSC correspondence.

I found it very unprofessional to ignore correspondence from the NSC and objected to this decision, but as I’m one of a dozen committee members it’s not my decision to make.

I don’t have much advice for you I apologise – other than to talk to one of the lawyers in Western Australia who deals specifically with firearms.  [Redacted].

Sources from within the WA firearm dealer community have told us that the order to refuse any contact let alone co-operation with the NSC allegedly came from Bevan Steele.

Of course, WAFTA is under no obligation to work with the NSC or even to talk to us.  However the refusal to fight unprecended attacks on WA shooters, speaks volumes about WAFTA’s leadership.

More recently WAPol and the government, decided to crack down on the issue of “property letters” for shooters in WA. One of the affected properties was Kalbarri Station, who happened to be the only non-gun dealer member of WAFTA. It is our understanding that apart from sympathy, they got no other support from WAFTA and joined the NSC.

The current rewrite of WA’s Firearms Act has also so far gone unchallenged because of WAFTA’s refusal to work with the NSC.

Giving priority to the SFFP

As we said earlier, Steele stood as a candidate for SFFP at the last state election in WA.

The SFFP were confident they would get their numbers in parliament increased and so quite a few of their candidates including Steele went “feral” on the NSC when we did not recommend WA shooters vote SFFP. This was because SFFP in WA had done preference deals with Labor and we believed they would not deliver the best outcomes for WA Shooters.

WA shooters need to speak up

WA Shooters should be asking if the tie up between the WA SSAA and WAFTA is in their best interests and should we suggest, choose wisely as to where they spend their hard earned dollars on ammunition, guns and accessories.

We also know that it was a WA dealer who supplied WAPol with the .50 cal rifle WAPol purchased that they used in the press conference as part of Papalia’s “war on shooters” campaign, although the dealer’s identity is being closely guarded.

At the same time, WA shooters are suffering under the nation’s worst gun laws, a police minister who won’t listen, the highest fees, and a rewrite of the state’s firearms act that could make life for WA shooters even tougher out west.

We have also received reports of how WA Police are restricting the movement of brass casings into WA, the high transfer fees, and of course the famous publishing of maps showing the locations of those who have licences.

Yet, not a peep from WAFTA. If WAFTA had supported the NSC’s recent SAT fight over calibre restrictions then perhaps things could have turned out differently.

The sooner WA shooters realise they will be better off with the NSC, the better.  We will continue to work tirelessly for a better deal for WA licence holders and offer to work with shooting organisations in WA to turn things around.

If you're in WA, you need to join the NSC. Click here.

7 thoughts on “How WA shooters got thrown under a bus”