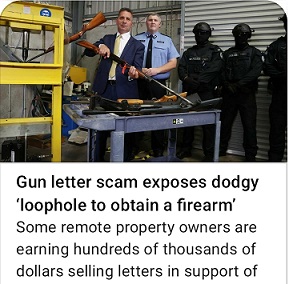 In this article we expose why the Minister’s claim is a fiction in yet another chapter in his ongoing War on WA shooters.

Unlike most other States, WA does not allow public land hunting.

This means that shooters going hunting in WA need to obtain a permission letter from a property owner.

Also unique to WA is the requirement for every individual firearm to be licensed and where a licence holder has obtained a property permission letter.

This means every firearm purchased or acquired for hunting is assessed by WAPol against the property letters size.  Some of the factors considered before WAPol  decides to licence a firearm, include the location and types of animals on the property.

For many years multiple property owners in WA have been able to assist WA shooters by providing property letters and allowing access to their properties for selected shooters.

Many have done this for reasonable fee and the earnings from the letters have been put back into development of facilities and maintenance on theses properties. The practice has, until recently, worked well for all parties involved.

What Papalia now thinks about his own restrictions

In the article in The West Australian, Police Minister Papalia said the sale of the property letters undermined the intent of the WA Firearms Act and highlighted the need for a complete rewrite of the state’s gun laws to enable a more stringent vetting process for anyone applying to own a firearm.

He quoted monetary figures that suggested property owners were making huge profits from the sale of the property letters.

Papalia doesn’t like the model he now has.  Perhaps he should allow public land hunting as is the case in other states.

Then the problem goes away.

Instead, Papalia is just looking for another reason to change the state’s gun laws.

One of the WA Property owners has contacted the NSC for help.

Evan Rutherford owns Kalbarri Shooting Adventures which is a farm 38 kms south of Kalbarri. He’s a member of both the SSAA and WAFTA (the WA Firearm Traders Association) and is one of 5 WA property holders targeted by WAPol and the minister over property letters they issued.

Evan confirmed he was not contacted by WAPol directly at any point about this matter, or in the run up to Papalia’s announcement, or story in The West Australian.

He first learnt what was going on when he received a phone call from a WA firearms dealer that had been supporting Kalbarri. The dealer advised he had been contacted by WAPol and ordered to immediately stop promoting the Kalbarri letter program.

In other words, the registry’s response was purely political.

Over the course of the next week, Evan made several calls to WAPol’s registry and even the Chief Commissioner’s office to attempt to get reasons for the “crackdown”, and to find out how the situation could be resolved.

Eventually he was told it was due to “safety reasons“ and to provide information on what safety measures he had in place.

Setting the record straight with the registry

On 11 April, Evan sent an email to the registry with the following information:

I can confirm in writing the following WAPOL concerns are addressed.

On the 14th April he received the following email from WAPol:

Sergeant Vandersluys forwarded me your email and it was progressed to my Divisional Office.

On review of the additional information provided I am encouraged you have put in place a number of risk strategies to reduce the risk to people you allow to shoot on your property, however the responsibility of Licensing Services is to the community, and with around 3000 persons listed on our systems as authorised to shoot on your property, we do not believe it is in the public interest to allow for persons to use your property as the basis for their genuine reason and need to shoot for hunting and recreation.

The strategies you have put in place are not regulated or enforceable and we cannot guarantee the safely of persons using your property.  As such, we are asking new applicants to provide additional information in relation to their genuine reason and need for a firearm in the form of an additional property letters granting them permission to shoot on another property that is not also oversubscribed by shooters.  These will be assessed on a case by case basis.

We have made a decision in the interests of public safety that we will be seeking other evidence to support a new applicant’s genuine reason and need for a firearm. The WA Police as the regulator has the discretion provided by the Firearms Act 1973 to request further information in relation to a person’s licensing application, where the current information provided does not satisfy the interests of public safety or the requirements of the licensing officer.

Unfortunately I can not offer any further advice on this matter.

Police distance themselves from the police minister

The WAPol email suggests the policy is not concerned with existing hunting properties, which backpedals from the picture being painted by Minister Papalia.

It exposes the minister’s statements as another cheap political stunt to get newspaper coverage in his ongoing War on WA shooters.

Evan and other affected property owners rely on the income from the property letters to survive. Yet Papalia has been willing push his own agenda even if it means destroying WA small businesses.

This is the same minister who falsely claimed gel blasters could be made into real working firearms and recently stated the National Firearms Agreement was John Howard’s “gift to the nation”.

As noted earlier Evan is an SSAA/ WAFTA member and was only allowing SSAA members to book his farm for shooting facilities.

He approached the SSAA and WAFTA with his situation for help and is waiting for their response. Hopefully they will assist.

Evan has also joined the NSC and we have committed to provide him with all the assistance we can, including a potential legal challenge in the State Administrative Tribunal (SAT).

In the meantime, Papalia has described the NSC as “Australia’s NRA” and said our actions are “disturbing”.

However we’re simply committed to fighting bad politicians and have made it clear we just want a good policy platform. This starts with stopping Papalia’s War on WA Shooters.

Shooters in WA need to make sure Labor gets the message by voting against Labor at next month’s federal election, so they can send a message to their state counterpart to pipe down.

Either that, or they need to get McGowan to sack him.